What is The Reality Book exactly? A Book?!

Seems like it should be! We've actually developed a state-of-the-art, HD Video play-along environment that's combined with charts, lessons and transcriptions to create in-depth learning sets for the tunes YOU need to know.

Clicking on "Browse the Videos," you'll find two dozen video links, starting with 4 videos in "SET ONE," each containing everything you need to get to work. Included in each package is:

Play with the Best:

The Reality Book experience is centered around placing you with an ensemble of some of the more dynamic jazz artists in the world, with the visual of their energy, movements, intent, and group interaction adding volumes of experiential material otherwise only accessible through live performance.

In addition, there are 25 solo transcriptions from the jazz masters to go with each set of changes, including solos by:

From performances on classic standards, such as:

I'LL REMEMBER APRIL / DOXY / AUTUMN LEAVES / IF I SHOULD LOSE YOU / BODY & SOUL
SWEET GEORGIA BROWN / BLACK ORPHEUS / HOW DEEP IS THE OCEAN / OLEO / HAVE YOU MET MISS JONES / DONNA LEE / THERE IS NO GREATER LOVE / IT COULD HAPPEN TO YOU / ONE FINGER SNAP / NIGHT & DAY / and many more....

Included in your monthly subscription is EVERYTHING on the site plus all future content and updates. One low subscription rate covers it all!

Sign up THIS WEEK, use our special code - JEN2019, and get 50% off our already low subscription rate for your first year.

See you inside The Reality Book! 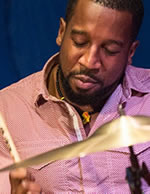 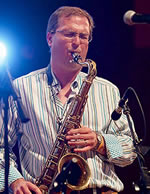 Geof Bradfield | Sax
Saxophonist and composer Geof Bradfield has shared stages throughout the world with jazz giants such as Randy Weston, Carl Allen, Brian Blade, and Orrin Evans, and at home in Chicago with his equally celebrated colleagues, Jeff Parker, Matt Ulery, Marquis Hill, and Dana Hall, to name a few. He's featured on over 50 recordings, including seven as a leader, garnering critical accolades from the New York Times, LA Times, Downbeat, and NPR. He has received commissions from Chamber Music America and has been a committed educator for decades, currently on the faculty at Northern Illinois University. 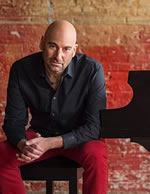 Ryan Cohan | Piano
An inventive pianist and celebrated composer/arranger, Ryan Cohan's contributions to the music scene in his hometown of Chicago and on visits to New York are recognized for "ingenuity and virtuosity" (Chicago Tribune), and a vital voice to the many he works with on the global stage. Cohan has appeared with a wide range of reknowned jazz, pop and classical luminaries including Freddie Hubbard, Joe Locke, Paquito D'Rivera, Kurt Elling, Gregory Porter, Steve Wilson, and The Chicago Symphony Orchestra. 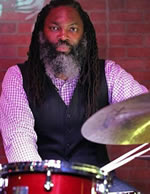 Dana Hall | Drums
A distinguished Special Trustees Fellow completing his Doctorate in ethnomusicology at the University of Chicago and the Director of Jazz Studies at DePaul University, Dana Hall has proven himself across the board as a fiery drumming talent, a pioneering academic and an intregal piece of the towering bands he's had the good fortune to work with. Branford Marsalis, Ray Charles, Roy Hargrove, Joshua Redman, Horace Silver, Michael Brecker, Nicholas Payton, are just a sample. Hall is also a longterm member of the Terell Stafford Quintet, the Music Director of the Chicago Jazz Ensemble, and he was formerly a member of the Carnegie Hall Jazz Band.

Marlene Rosenberg | Bass
Bassist Marlene Rosenberg has been a dominant force on the Chicago jazz scene for decades, performing with traveling legends such as Cedar Walton, Kenny Barron, Stan Getz, Lewis Nash, and Jazzmeia Horn, to name a few. She toured internationally with some of the icons of American music: Joe Henderson, Nancy Wilson, Joe Williams, Frank Morgan, Ed Thigpen, Albert "Tootie" Heath, Roy Hargrove and Wallace Roney. As an educator, she's on the jazz and bass faculty at Northern Illinois University and an applied artist at Roosevelt University. 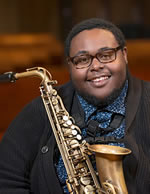 Lenard Simpson | Saxophone
Originally from Milwaukee, the 23-year-old saxophonist is a quickly rising jazz artist. In his teen years, he was selected for the Grammy Camp Jazz Session and was a winner of Chicago's Luminarts Jazz Competition. Moving to Chicago to study at Northern Illinois University, he had the opportunity to play with artists such as Brian Lynch, Robert Irving III, Charles Heath, Ari Brown, and Bobby Broom, and was a member of drummer George Fludas' "For Funks' Sake." Simpson is now a graduate student at the prestigious Monk Institute in Los Angeles. 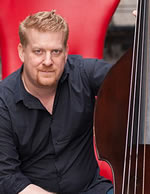 Clark Sommers | Bass
Grammy award-winning bassist Clark Sommers has been recording and touring internationally with jazz vocal great Kurt Elling for over a decade. Based in Chicago, he's shared bills with Herbie Hancock, Wayne Shorter, and Tony Bennett, and performed and appeared on recordings with Cedar Walton, Brian Blade, Ernie Watts, Peter Bernstein, and so many more. He studied with Charlie Haden at the California Institute of the Arts and still continues studies with David Grossman of the New York Philharmonic. 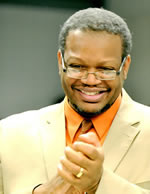 Reggie Thomas | Piano
After two decades as a professor at Southern Illinois University and Michigan State University, the hard-swinging pianist Reggie Thomas is now leading the Jazz program at Northern Illinois University, and is active nationally at noted jazz academies, camps and festivals. Besides fronting his own groups, he's performed with Hamiett Blueit, Ann Hampton Callaway, and the Carl Allen/Rodney Whitaker Ensemble, and is often with the Count Basie Band as an accompanist for the Thelonious Monk International Jazz Competition. He has performed throughout Asia, North America and Europe.

Bill Anschell | Piano
Seattle pianist/composer Bill Anschell's diverse life trajectory offered a lengthy association with vocalist Nnenna Freelon, touring the world as musical director, arranger, pianist; a stint as Jazz Coordinator for the Southern Arts Federation; touring opportunities in South America with his own trio; and he has produced a dozen superlative recordings. Well known as a jazz humorist, Anschell's satirical essay, "Careers in Jazz," is the all-time most-read piece on All About Jazz.com with more than 350,000 views, and was featured in the Wall Street Journal. He was a winner of the inaugural Paul Desmond Award, a celebration of the funniest jazz artists, and his compositions have appeared on programs including The West Wing, NCIS: LA, The Wire, and HBO's Bessie Smith biopic, "Bessie." 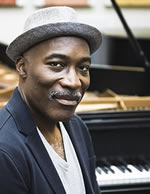 Darrell Grant | Piano
Introduced to international audiences in 1988 as the pianist with legendary vocalist Betty Carter, pianist Darrell Grant has been on the frontlines of the jazz world, recording and performing with Brian Blade, John Patitucci, Bill Frisell, Branford Marsalis, David Sanborn, Esperanza Spalding, Nicholas Payton, and so many more. Through eight albums of his own, dozens as a sideman, and two decades as an educator and leader in the arts, Darrell Grant's multi-faceted creative projects and innovative initiatives reflect a belief in the extraordinary power of art to inspire and move others to transform society and themselves. 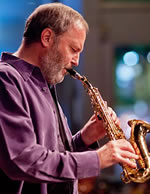 Brent Jensen | Saxophone
Seattle saxophonist BRENT JENSEN is an indefatigable educator, saxophonist and advocate for the music. A student of jazz legend Lee Konitz, Jensen's multiple releases on Origin Records have topped the jazz charts nationwide, "One More Mile," was named a top release of the year by the Village Voice, and his "Sound of a Dry Martini" tribute to Paul Desmond has maintained a presence in the marketplace for two decades. The former Director of Jazz at the College of Southern Idaho, Brent has shared the stage with many greats including Gene Harris, Bill Watrous, the Lionel Hampton Big Band, and Curtis Stigers, and has been a mentor to dozens of working musicians across the country. 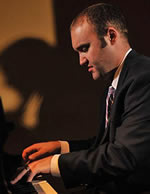 Ben Markley | Piano
Pianist Ben Markley has performed with Brian Lynch, Greg Osby, Eddie Henderson, Terell Stafford, George Garzone, and John Fedchock. His recent, critically-acclaimed recording, "Clockwise: The Music of Cedar Walton" (OA2 Records) was featured as one of the top albums of 2017 by DownBeat magazine. He currently serves as Director of Jazz Studies at the University of Wyoming where he directs and coaches the Wyoming Jazz Ensemble, and combos. He also teaches applied jazz piano, improvisation and is the director of the UW Jazz Festival. 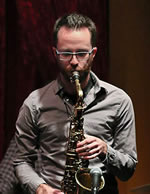 John Nastos | Saxophone
Portland saxophonist John Nastos attended the Manhattan School of Music on scholarship studying with Dick Oatts, Bob Mintzer, Steve Wilson, and Mike Abene. Returning to Oregon, Nastos has performed with a who's who of jazz musicians and toured extensively with Grammy-winning artists Dianne Schuur and Esperanza Spalding. In 2011, Nastos developed an innovative new metronome app called Metronomics, which is now used by thousands of musicians around the world. He followed up in 2015 with a sister app called Harmonomics. Nastos is currently on faculty at Portland State University.

Alexandra Sjobeck | Piano
Pianist Alexandra Sjobeck's captivating style led her from her home state of Idaho to New York City, where she graduated from the Manhattan School of Music, to the famed jazz program in Greely, Colorado where she earned her Master's at the University of Northern Colorado. Active as an educator, performer and touring artist, Sjobeck has three albums as leader and co-leader, and has composed music for film, conducted her own music for big band and has presented workshops and masterclasses throughout the United States.